World on the way of World War 3 . America and Western countries are trying to help Ukraine to defend against Russia.
Whereas, Russia to secure itself from future attacks.

NATO v/s BRICS? Major Difference between both these alliance 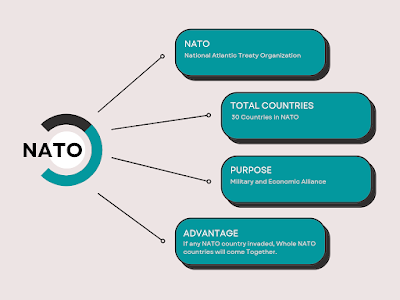 On one side, where America has its military alliance with other 29 different Countries called NATO.
On other side, Russia has its economic alliance with other 4 countries called BRICS.
Both these alliance are jointly made for the security, economic and development purpose.
How many countries are there in NATO and BRICS in 2022?
Total 30 countries in NATO, which are Albania, Belgium, Bulgaria, Czech Republic ,Denmark ,Estonia ,France, Germany, Greece, Hungary, Iceland ,Italy ,Latvia, Lithuania, Luxembourg, Netherlands ,North Macedonia, Norway ,Poland, Portugal, Romania ,Slovakia, Slovenia ,Spain, Turkey ,United Kingdom ,United States, Montenegro.
For more information Visit the official Website
Total 5 countries in BRICS, which are Brazil, Russia, India, China,South Africa.
What is the difference in NATO and BRICS?
There are several reasons which make a big difference in between NATO and BRICS, which can be understood from this video.
NATO vs BRICKS NikefreeRuns
Next Post Previous Post
Article,COUNTRIES IN NATO,INTERNATIONAL ALLIANCE OF NATO,NATO vs BRICKS,NikefreeRuns